I have co-authored a post with a daily chart today that presents data on the cruel practice that is female genital mutilation: 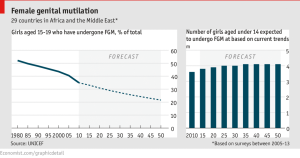 EVERY ten seconds one girl around the globe has her genitals sliced with a knife. The labia are pulled back and some or all of the clitoris is cut away; sometimes the labia are severed or sewn tight. The practice has deep cultural roots in many countries. But unlike male circumcision, which has been shown to reduce disease and actually enhances sexual pleasure, female genital mutilation puts its victim at risk of infection, infertility and death. Sex often becomes extremely painful: indeed, this may be the very justification for it by those who wield the blade.

New data released today by UNICEF paints a mixed picture. Although the prevalence of female genital mutilation is declining, the population growth in the countries where it is practiced means the actual number of victims will increase. If the present trend continues, the number of girls cut each year will grow from 3.6m today to 4.1m in 2035. It marks a big increase, considering that around two-thirds of both men and women oppose the activity in the 29 countries in Africa and the Middle East where it is most prevalent. And in some places, around three-quarters of women are victims (as our article from last year reported)