What Heritage does not make clear about federal spending

A popular chart by the conservative think tank The Heritage Foundation is shared by thousands of people on Facebook every now and then. The chart is titled “Federal Spending Grew Nearly 12 Times Faster than Median Income.” The problem with this chart is that it does not paint a nuanced picture of how much the federal spending in the United States actually has grown. This is because one of the two plots is an aggregate number (total federal spending in dollars) and the other plot is a median value (median household income).

The fact that total federal spending has grown twelve times faster than median household income since 1970 is quite irrelevant if we do not take into account the growth in the number of households. If the number of households had grown faster than federal spending, the size of the federal government would actually have shrunk (Sweden has one of the largest public expenditures per capita in the world, but imagine how small the American federal government would be if its total federal spending equaled that of Sweden). So what did the household growth in America look like? 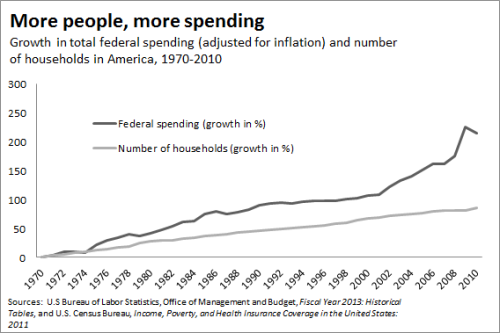 A caveat to be mentioned before showing the next graph is that it has not been possible to exactly replicate the numbers used by The Heritage Foundation. The calculations used here reaches the same number for federal spending of $3.6 trillion for 2010, but while Heritage estimates that the inflation-adjusted federal spending in 1970 was $926 billion, the number used here is $1.1 trillion. Similarly, both estimate median household income to be about $51,000 in 2010, but this blog (which copied numbers straight from the referred U.S Census Bureau report) uses a much greater number ($45,146 compared to $41,358) for 1970. So The Heritage Foundation finds that both federal spending and median income has grown at a faster rate than what this blog estimates. It is not clear from their chart which inflation-adjusted numbers they used or what price index they used to adjust for inflation, but overall this should not make too much of a difference. The general tendencies will still be the same. Especially since they find greater growth both in federal spending and in income.

So while The Heritage Foundation is correct that federal spending has grown quite rapidly – also in per-capita terms – the magnitude is much smaller than what their chart shows. And this would be the same case if one used their exact numbers as well, simply because the number of households has grown at a fast pace. Another measure of federal spending that might add some perspective to the debate on this issue is federal spending as a fraction of GDP.

The chart made by The Heritage Foundation is often referred to as a long-term trend, and one of the main reasons why the United States has piled up so much debt. But this argument seems too simplified. In terms of share of GDP, there is no trend. Federal spending was actually lower in 2008 than in 1975, and lower in 2001 than in 1970.