In many countries the working-age population now constitutes the highest share seen in decades. That will not be the case in the upcoming years. The European “peak workforce” that this blog has discussed earlier is not unique for Swedes, Germans, and Italians. In fact, in most of the world’s richest countries, the dependency ratio (the number of people younger than 15 and older than 64 per person in working age) has been shrinking for the past half century. More people have, relatively speaking, had to provide for fewer people. Until now. As the graph shows,  the dependency ratios will now start to increase, and do so substantially over the coming five decades.

These 42 countries are the member states of either G20 or/and OECD (the EU is excluded from G20 because it is not a country). Between 1960 and 2010, only three of these states (Japan, Sweden and Germany) experienced a growing dependency ratio. In economic-demographic terms those decades were thus on average favorable. In thirty-nine countries the working-age population grew faster than the number of children and seniors. Between 2010 and 2060, in sharp contrast, only two countries (India and South Africa) are expected to face declining dependency ratios. This is related to the fact that both India’s and South Africa’s populations are predicted to continue to grow in the coming decades. The remaining forty countries are likely to have to deal with severe demographic troubles.

This expected demographic pattern is worrisome for several reasons. While increasing longevity is inherently a good thing, it will increase the pressure on pension schemes and healthcare systems. An increasing dependency ratio means that unless employment is increased – through a higher statutory retirement age, sooner average entry on the labor market, or other measures – fewer will have to provide for more. Will this be the end to social security as we know it?

Another troubling outlook is debt. Greece, Italy, Portugal, Ireland, Spain, France, United Kingdom, Canada, and United States all piled up their debt while the dependency ratio in each country was falling, and population on average was growing. How that debt should be repaid n0w that fertility rates slow down, and the dependency ratios are set to increase is a question that is equally mind-boggling as it is alarming.

There is a demographic cliff ahead. Are we going to jump or at least try to climb down?

Not quite there yet

Most people who have taken a Principles of Economics 101 course are familiar with the convergence hypothesis, i.e. that poorer economies in terms of per capita should grow at faster rates than wealthier economies eventually resulting in a convergence. Few would probably defend the absolute version of the convergence hypothesis today, but if there is somebody who does, the following graph will at least show that we are not quite there yet. 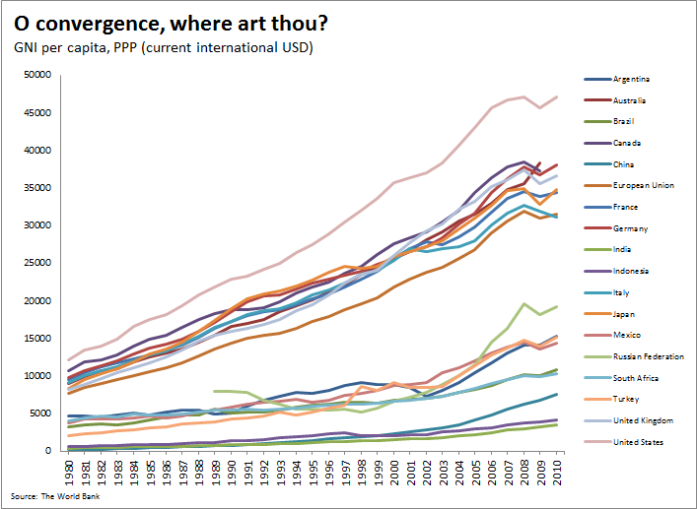 (Feel free to use this figure for your own purposes, but please do not forget to mention this blog as the source.)